Almost Sunrise tells the story of two army veterans, Tom Voss and Anthony Anderson, as they undergo a most unusual pilgrimage. Having returned without any physical wounds from their deployment in Iraq, Tom and Anthony find that their experiences have left them with a very different kind of wound, one much more difficult to treat. They are not, however, suffering only from Post-Traumatic Stress Disorder, or PTSD. That diagnosis implies that the fear and terror of armed combat does not stop once the conflict is over. But Tom and Anthony, and countless other returned soldiers like them, are haunted as well by guilt and shame of the brutal and inhumane things they were compelled to do to other human beings during their time in Iraq. At the end of his rope, Tom decides that he is going to walk to California. Anthony decides to accompany him, and the so-called Veterans Trek is born. Their stated purpose is to raise awareness of the suffering that returning veterans endure in a nation that has marginalized them and cut corners on their benefits.

As the filmmakers follow Anthony and Tom across the country, we meet their families and learn from their pain, and we see countless other Americans who, inspired by the Veterans Trek, walk with them, donate food and equipment and offer them food at their table and a place to sleep. For Tom and Anthony, the realization that those they killed were not just the “enemy” but also someone’s parents, someone’s children, someone’s siblings and someone’s loved ones has led to the feelings of guilt and shame, of “moral injury”, that inspire their most unusual pilgrimage.

To learn more about the film, get involved in the impact campaign, or sign up to host an educational screening, visit the Almost Sunrise website here. 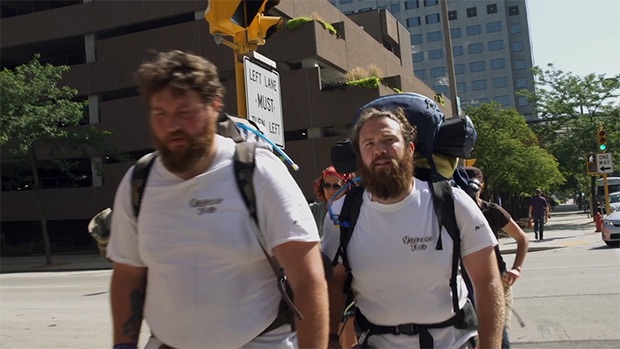